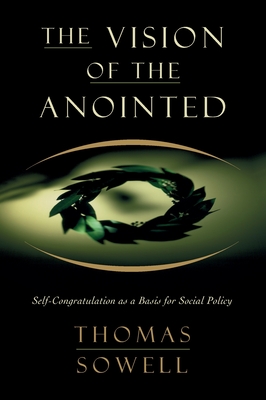 In The Vision of the Anointed, Thomas Sowell presents a devastating critique of the mind-set behind the failed social policies of the past thirty years. Sowell sees what has happened during that time not as a series of isolated mistakes but as a logical consequence of a tainted vision whose defects have led to crises in education, crime, and family dynamics, and to other social pathologies. In this book, he describes how elites—the anointed—have replaced facts and rational thinking with rhetorical assertions, thereby altering the course of our social policy.

Thomas Sowell is a senior fellow at the Hoover Institution, Stanford University. He is the author of dozens of books including Charter Schools and Their Enemies, winner of the 2021 Hayek Book Prize. He is the recipient of numerous other awards, including the National Humanities Medal, presented by the President of the United States in 2003.

"This is as compelling an explanation as any for the seemingly disproportionate amount of condescension and politically correct invective that emanates from the liberal side of the political spectrum toward the conservative opposition."—Scott McConnell, Wall Street Journal

"As always, Sowell's analysis is well informed and displays a great deal of that increasingly uncommon quality, common sense... In the largest sense, The Vision of the Anointed is a book about the perils of ideology—those dazzling intellectual-moral constructions that seduce the unwary into ignoring the way the world works for the sake of dreams about the way it must."—Roger Kimball, The American Spectator

"Mr. Sowell's eye is sharp, and everyone who has been up against progressive orthodoxy will find his or her own candidate for Most Annoying Liberal Kiss-Off Award."—Suzanne Garment, Washington Times

"Avid conservatives, for whom Sowell is a true-blue intellectual force, will certainly seize upon his analysis for succor."—Booklist