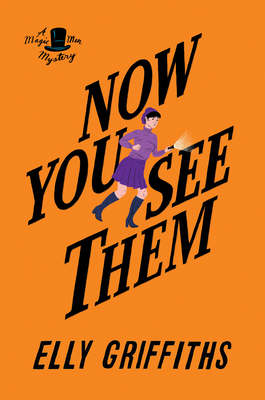 By Elly Griffiths
Email or call for price.
Hard to Find

The fifth book in the Magic Men series, Now You See Them is a wild mystery with detective Edgar Stephens and the magician Max Mephisto, as they investigate a string of presumed kidnappings in the swinging 1960s.

The new decade is going well for Edgar Stephens and his good friend the magician Max Mephisto. Edgar is happily married, with children, and promoted to Superintendent. Max has found fame and stardom in America, though is now back in England for a funeral, and a prospective movie job. Edgar’s new wife, though—former detective Emma—is restless and frustrated at home, knowing she was the best detective on the team.

But when an investigation into a string of disappearing girls begins, Emma sees her chance to get back in the action. She begins her own hunt, determined to prove, once and for all that she’s better than the boys. Though she’s not the only one working toward that goal—there’s a new woman on the force, and she’s determined to make detective. When two more girls go missing, both with ties to the group, the stakes climb ever higher, and Max finds himself drawn into his own search.

Who will find the girls first? And will they get there in time?

“As always, Griffiths creates an authentic sense of time and place…readers will eagerly await more to come.”--Booklist, STARRED review

"Griffiths mixes well-defined characters with a clever plot. Her examination of the place of women in 1960s British society should appeal to readers of procedurals and historical fiction fans."--Publishers Weekly