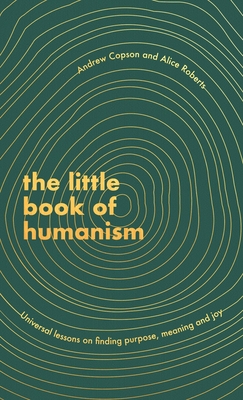 We all want to lead a happy life. Traditionally, when in need of guidance, comfort or inspiration, many people turn to religion. But there has been another way to learn how to live well - the humanist way - and in today's more secular world, it is more relevant than ever.

In THE LITTLE BOOK OF HUMANISM, Alice Roberts and Andrew Copson share over two thousand years of humanist wisdom through an uplifting collection of stories, quotes and meditations on how to live an ethical and fulfilling life, grounded in reason and humanity.

With universal insights and beautiful original illustrations, THE LITTLE BOOK OF HUMANISM is a perfect introduction to and a timeless anthology of humanist thought from some of history and today's greatest thinkers.

Professor Alice Roberts is a writer, broadcaster, and President of Humanists UK. She is the bestselling author of eight popular science books including Evolution: The Human Story, the Incredible Unlikeliness of Being and Tamed: Ten Species that Changed Our World. Making her television debut on Time Team in 2001, she has become one of Britain's best-known broadcasters and has written and presented a huge range of television series for BBC2, BBC4 and Channel 4, including The Incredible Human Journey, Origins of Us and Ice Age Giants, and several Horizon programmes. Her humanist 'mini-sermons' on Twitter have been liked and shared many thousands of times.

Andrew Copson is the Chief Executive of Humanists UK and President of Humanists International. He has provided a humanist voice on many television and radio programmes and written on humanism for publications including The Economist, New Statesman, Guardian, Prospect, The Times and Buzzfeed. With AC Grayling, he edited the Wiley Blackwell Handbook of Humanism and his most recent book is Secularism: A Very Short Introduction. He has been the humanist contributor to many compendiums and anthologies of quotations such as Wisdom for Life and numerous resources for schools.

This beautiful little book is, well, beautiful. The perfect antidote to a great deal of nonsense—Shappi Khorsandi

A wonderful source of wisdom and calm—Frank Turner

THE LITTLE BOOK OF HUMANISM by Andrew Copson Alice Roberts is a delight. Give it like a bunch of flowers to someone you love. A compendium of uplifting quotations woven together by the two leading figures in today's Humanists UK—Richard Dawkins

This is a delightful book to dip into, to give comfort, stimulation and guidance. It puts humanism right into the mainstream of enlightened thinking—Janet Whitaker

Anytime my head feels heavy this book seems to find me and pick me up ... A fantastic introduction to a new way of thinking—GalwayNow