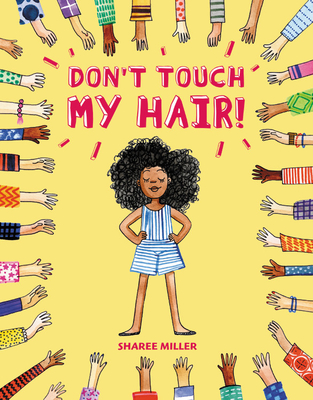 By Sharee Miller
$17.99
Currently Out of Stock - Available to Ship From Our Warehouse in 3-5 Days

An entertaining picture book that teaches the importance of asking for permission first as a young girl attempts to escape the curious hands that want to touch her hair.
It seems that wherever Aria goes, someone wants to touch her hair. In the street, strangers reach for her fluffy curls; and even under the sea, in the jungle, and in space, she's chased by a mermaid, monkeys, and poked by aliens...until, finally, Aria has had enough!
Author-illustrator Sharee Miller takes the tradition of appreciation of black hair to a new, fresh, level as she doesn't seek to convince or remind young readers that their curls are beautiful--she simply acknowledges black beauty while telling a fun, imaginative story.

Sharee Miller has a BFA in communication design from Pratt Institute. She lives in Brooklyn, where she enjoys spending time with her two cats and illustrating fun stories. Sharee is the author and illustrator of Princess Hair. She invites you to visit her website at shareemiller.com and her Instagram @coilyandcute.

"Aria is a character with a healthy self-image who demonstrates courage and grace in communicating with others."—Booklist

"A good exploration of personal boundaries and respect in general."—BCCB

"Sharee Miller's Don't Touch My Hair! is a right-on-time narrative showcasing the power kids--and all people--have to demand their voices be heard."—Shelf Awareness

Praise for Princess Hair:
* "After decades of white princesses' domination of American fairytales, Miller expands the vision of what princess hair can look like to black girls.... A sweet and joyful affirmation of the truth that 'NAPPY princesses are HAPPY princesses.'"
—Kirkus Reviews, starred review

"This is the perfect book for young girls, but especially girls who might not be happy with their hair because it's different from the hair that they see on others."—The Huffington Post

"Miller offers a joyful celebration of the diversity of Black girlhood and Black girls' hair."—The Bulletin