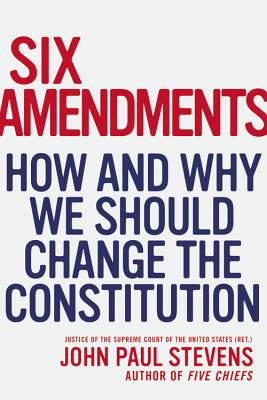 For the first time ever, a retired Supreme Court Justice offers a manifesto on how the Constitution needs to change.

By the time of his retirement in June 2010, John Paul Stevens had become the second longest serving Justice in the history of the Supreme Court. Now he draws upon his more than three decades on the Court, during which he was involved with many of the defining decisions of the modern era, to offer a book like none other. Six Amendments is an absolutely unprecedented call to arms, detailing six specific ways in which the Constitution should be amended in order to protect our democracy and the safety and wellbeing of American citizens.

Written with the same precision and elegance that made Stevens's own Court opinions legendary for their clarity as well as logic, Six Amendments is a remarkable work, both because of its unprecedented nature and, in an age of partisan ferocity, its inarguable common sense.

Justice John Paul Stevens served on U.S. Supreme Court from 1975 until his retirement in 2010. He is the third-longest serving Justice in American history. Born in Chicago, Illinois in 1920, Stevens served in the United States Navy during World War II and graduated from Northwestern University School of Law. He was appointed to the Seventh Circuit Court of Appeals in 1970 by President Richard Nixon and to the Supreme Court in 1975 by Gerald Ford. He was the author of two other books, Five Chiefs and The Making of a Justice. Justice Stevens passed away in 2019.

PRAISE FOR THE FIVE CHIEFS:

"Informative and very appealing....It's classic justice Stevens: understated and generous to those he differs with, but absolutely clear on where he believes justice lies."
--- Adam Cohen, Time

"Laced with observations on the court's architecture, traditions and even its seating arrangements, it is the collected ruminations of a man who has served his country in war and peace, across the decades... His memoir is as gracious as its author and a reminder that Stevens is more than a longtime member of the nation's highest court. He is a national treasure."
--- Jim Newton, Los Angeles Times

"An important addition to American history....At its core, the book is not just another memoir from yet another judge. It marks instead the end of an era on the Supreme Court and in the broader swath of American law and politics."
--- Andrew Cohen, The Atlantic

"Coming from the last of a dying breed of jurists who genuinely believe you can learn something from everyone if you just listen hard enough, it is a lesson in how, at the Supreme Court, civility and cordiality matter more, even, than doctrine."
--- Dahlia Lithwick, Washington Post