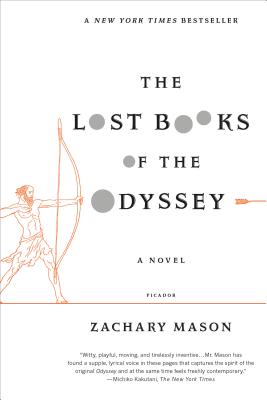 Zachary Mason's brilliant and beguiling debut novel reimagines Homer's classic story of the hero Odysseus and his long journey home after the fall of Troy. With hypnotic prose, terrific imagination, and dazzling literary skill, Mason creates alternative episodes, fragments, and revisions of Homer's original that, taken together, open up this classic Greek myth to endless reverberating interpretations. The Lost Books of the Odyssey is punctuated with great wit, beauty, and playfulness; it is a daring literary page-turner that marks the emergence of an extraordinary new talent.

Zachary Mason is a computer scientist and the New York Times bestselling author of The Lost Books of the Odyssey and Void Star. He lives in California.

“[A] dazzling debut . . . Stunning and hypnotic . . . Mr. Mason . . . has written a series of jazzy, post-modernist variations on the Odyssey, and in doing so he's created an ingeniously Borgesian novel that's witty, playful, moving and tirelessly inventive . . . This is a book that not only addresses the themes of Homer's classic--the dangers of pride, the protean nature of identity, the tryst between fate and free will--but also poses new questions to the reader about art and originality and the nature of storytelling.” —Michiko Kakutani, The New York Times

“Zachary Mason has achieved something remarkable. He's written a first novel that is not just vibrantly original but also an insightful commentary on Homer's epic and its lasting hold on our imagination.” —John Swansburg, Slate.com

“Mason has a big heart beneath all his narrative trickery, and he uses it to bring a contemporary sensitivity to the myths.” —Jeremy McCarter, Newsweek

“Jubilant in execution. Perverse and irreverent.” —Katherine A. Powers, The Boston Globe

“[The Lost Books of the Odyssey] is, to my surprise, a wonderful book. I had expected it to be rather preening, and probably thin. But it is intelligent, absorbing, wonderfully written, and perhaps the most revelatory and brilliant prose encounter with Homer since James Joyce.” —Simon Goldhill, The Times Literary Supplement

“A subtle, inventive, and moving meditation on the nature of story and what Louis MacNeice calls ‘the drunkenness of things being various.' ” —John Banville, Booker Prize–winning author of The Sea

“Spellbinding. In his versions of these ancient myths, Mason twists and jinks, renegotiating the journey to Ithaca with all the guile and trickery of Odysseus himself. Rarely is it so reassuring to be in the hands of such an unreliable narrator.” —Simon Armitage, author of The Odyssey: A Dramatic Retelling of Homer's Epic

“A stirring revelation: Zachary Mason's astounding glosses of the Odyssey plunge us into an unforeseeable and hypnotic dimension of fiction. Of the three possible interpretations of the work that he proposes--Homeric stories anciently reproduced by recombining their components, a Theosophist dream of abstract mathematics, and pure illusion (that is, it was all made up by him)--the result is one and the same. This enthralling book is his doing, whether as translator, conjuror, or author. I vote for number three.” —Harry Mathews, author of My Life in CIA

“Mason's fantastic first novel, a deft reimagining of Homer's Odyssey, begins with the story as we know it before altering the perspective or fate of the characters in subsequent short story–like chapters . . . This original work consistently surprises and delights.” —Publishers Weekly (starred review)

“These imaginary lost books of The Odyssey enhance Homer's epic tale with alternative scenarios and viewpoints. A finalist this year for the New York Public Library's Young Lions Award, Mason employs clear, crisp prose and a clever sense of humor to propel the action briskly . . . A paean to the power of storytelling.” —Library Journal

“Though none of these brilliantly conceived revisions fits neatly into Homer's classic poem, each resonates with something of the artistic vigor of the ancient original . . . A daring and successful experiment in fictional technique.” —Booklist

“[A] literary adventure in which everything--the hero, the author, even the reader--is up for grabs . . . The epic as kaleidoscope.” —Kirkus Reviews

“Reading Zachary Mason's forthcoming The Lost Books of the Odyssey, I've been in danger of missing my subway stop . . . Funny, spooky, action-packed, philosophical--the mood keeps shifting, and you keep wanting to read just one more.” —Barnes and Noble Review