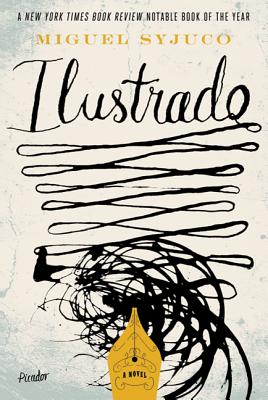 It begins with a body. On a clear day in winter, the battered corpse of Crispin Salvador is pulled from the Hudson River. Gone, too, is the only manuscript of his final book, a work meant to rescue him from obscurity by exposing the crimes of the Filipino ruling families. Miguel, his student and only remaining friend, sets out for Manila to investigate.

The result is a rich and dramatic family saga of four generations, tracing one hundred and fifty years of Philippine history forged under the Spanish, the Americans, and the Filipinos themselves. Exuberant and wise, wildly funny and deeply moving, Ilustrado is a daring and inventive debut novel that "begins as a murder mystery and develops into an ambitious exploration of cultural identity, ambition, and artistic purpose." (The New Yorker).

Miguel Syjuco is a Filipino author, journalist, civil society advocate, and professor at New York University Abu Dhabi. His debut novel, Ilustrado, was a New York Times Notable Book of the Year and won both the Man Asian Literary Prize and the Grand Prize at the Palanca Awards, his country’s top literary honor. He has worked as a contributing opinion writer for The International New York Times, written for many of the world’s most respected publications, and spoken on Philippine politics and culture at the World Forum for Democracy and the World Economic Forum. He serves on the advisory council for the Resilience Fund, a project by the Global Initiative Against Transnational Organized Crime to empower communities most threatened by criminality.

“Winner of the 2008 Man Asian Literary Prize while still in manuscript form, Ilustrado is a hip and secure first novel about the urgency of art and regret. Confident and quirky, with passages that recall early Phillip Roth and a structure not unlike the best M. Night Shyamalan films, the book actively seeks to provoke its audience with bathroom humor and sexist stabs at superficial melodrama. Such scenes are bookended by passages of profundity that somehow manage to always say something about life as well as literature.” —Roberto Ontiveros, The Dallas Morning News

“Ambitious . . . In a daring literary performance, Syjuco weaves the invented with the factual . . . Ilustrado is being presented as a tracing of 150 years of Philippine history, but it's considerably more than that . . . Spiced with surprises and leavened with uproariously funny moments, it is punctuated with serious philosophical musings.” —Raymond Bonner, The New York Times Book Review

“A dazzling and virtuosic adventure in reading . . . The narrative is organised with immense confidence and skill . . . The author's post-modernist bag of tricks also contains a whip-crack narrative skill that's as reminiscent of Dickens as it is of Roberto Bolaño . . . There's a capaciousness that makes the book richly attractive to wander into . . . [This] novel . . . fizzes with the effervescence a large book can have when its author is in total control of the material. This isn't a story; it's the unfolding of an entire world, a mirror-land that seems familiar but is always ineffably strange . . . Syjuco is a writer already touched by greatness . . . This is a remarkably impressive and utterly persuasive novel. Its author . . . may one day succeed with the Nobel committee.” —Joseph O'Connor, The Guardian

“An exuberant, complex, and fascinating ride through 150 years of Philippine history . . . Syjuco's writing is playful, smart, and confident . . . An inventive and exciting debut.” —Grace Talusan, Rumpus

“An extraordinary debut, at once flashy and substantial, brightly charming and quietly resistant to its own wattage . . . Syjuco's gifts for pastiche, his protean narrative energy, are in particular evidence in these pitch-perfect fictions of the fictions of his fictional author . . . An exuberant, funny novel that neither takes its grand ambitions too seriously, nor pretends to be measuring itself by any less a scale of intent. How Syjuco . . . has done this is foremost a testament to his prodigious gifts . . . With his dazzling first foray, Syjuco suggest how his new Asia, his new identity, must ‘look' on the page and between the covers. That look is unexpected and fresh, quite unlike anything that has been seen before.” —Charles Foran, The Globe and Mail

“Wildly entertaining . . . Engaging . . . Absolutely assured in its tone, literary sophistication and satirical humor . . . Syjuco is only on his mid-30s, and he already possesses the wand of the enchanter.” —Michael Dirda, The Washington Post

“Ilustrado will provoke audible oohs and ahhs from readers . . . The writing is gorgeous. Plus, there's an O. Henry twist in the epilogue. This is a great book. Read it.” —Luis Clemens, Senior Editor, Tell Me More

“Dazzling . . . It is a virtuoso display of imagination and wisdom, particularly remarkable from a 31-year-old author; a literary landmark for the Philippines and beyond.” —Michele Leber, Booklist (starred review)

“Through his vivid use of language, Syjuco has crafted a beautiful work of historical fiction that's part mystery and part sociopolitical commentary. Readers who enjoyed Junot Díaz's The Brief Wondrous Life of Oscar Wao will enjoy this literary gem.” —Library Journal (starred review)

“An ambitious debut novel, winner of the Man Asian Literary Prize, introduces an author of limitless promise . . . It dazzles as brightly as Jonathan Safran Foer's Everything Is Illuminated . . . First novels rarely show such reach and depth.” —Kirkus Reviews (starred review)

“Miguel Syjuco's dizzyingly energetic and inventive novel views his native Philippines with a merciless yet loving eye, its many voices a chorus illuminating the various facets of this chaotic, complicated country. An ambitious and admirable debut.” —Janice Y. K. Lee, author of The Piano Teacher

“Vulnerable and mischievous, sophisticated and naïve, Ilustrado explores the paradoxes that come with the search for identity and throws readers into the fragile space between self-pursuit and self-destruction. A novel about country and self, youth and experience, it is elegiac, thoughtful, and original.” —Colin McAdam, author of Fall and Some Great Thing

“Winner of the 2008 Man Asian Literary Prize while still in manuscript form, Ilustrado is a hip and secure first novel about the urgency of art and regret. Confident and quirky, with passages that recall early Phillip Roth and a structure not unlike the best M. Night Shyamalan films, the book actively seeks to provoke its audience with bathroom humor and sexist stabs at superficial melodrama. Such scenes are bookended by passages of profundity that somehow manage to always say something about life as well as literature.” —Roberto Ontiveros, The Dallas Morning News

“The book Ilustrado most recalls is Junot Diaz's The Brief Wondrous Life of Oscar Wao. Though stylistically the two writers couldn't be further apart, the way Syjuco places his characters in the political pressure cooker of the Philippines's political history achieves the same disorienting mix of breadth and claustrophobia. The book picked up the Man Asian Literary Prize in 2008 and will likely be nominated on our shores, as well.” —Jonathan Messinger, Time Out Chicago

“The thing about wildly inventive novels that play with form and voice and style is that they're often easier to praise than to read. Even the ones that feel like a rewarding accomplishment to finish can be tough sledding to get through. That's one reason why Miguel Syjuco's debut novel, "Ilustrado," is so rare, rich and rewarding . . . Syjuco has talent and style to burn--he's a dynamic and funny writer who uses every tool at his disposal to create a narrative. The result is literary fiction that will keep you up all night thrilled, laughing, enthralled and amazed. Don't miss it.” —David Daley, The Courier-Journal

“This is a big, bold, cunning, impassioned, plangent and very funny book. . . Although there are riotously satirical parts to this book, there is an emotional core as well: the comedy would lose its tang without the characters' blasted hopes and self-aware inadequacies. Like Steve Toltz's A Fraction of the Whole, another epic comedy from the southern hemisphere, it deftly negotiates between the absurd and the all-too-real, the cosmopolitan and the local, the nature of failure and celebrity.” —Stuart Kelly, Scotland on Sunday

“Beyond Ilustrado's furious skewering of Filipino elites is writing that bristles with surprising imagery. Life with a girlfriend, Miguel says, ‘was like walking naked around a cactus with your eyes closed.' Miguel notices how an old woman's skin ‘sags on her as if she were a child wearing her father's sweater.' An unruly and energizing novel, filled with symmetries and echoes that only become apparent in its closing pages, Ilustrado pushes readers into considering matters of authenticity, identity and belonging. Despite its various comic turns, it is ultimately a tragedy--a raw reminder of the fact that we can never, really, find our way back home.” —Financial Times

“Ilustrado is built like a carousel, revolving between first- and third-person commentary, news reports, interviews, extracts from Salvador's work and a Crispin Salvador biography the narrator is writing. Nonetheless it is all held tightly together, focused on the returning son's difficulties with his family and his efforts to acclimatize. Manila is conjured as a dystopian black hole. Civil unrest crackles at the edge of the narrator's vision as he explores the metropolis, reaching critical mass when a typhoon hits the city near the novel's climax.” —Times Literary Supplement