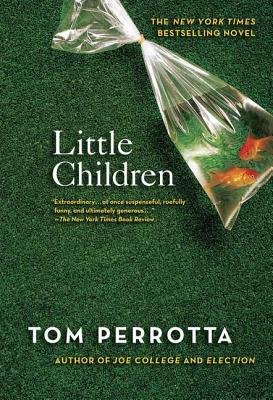 By Tom Perrotta
Email or call for price.

Unexpectedly suspenseful, but written with all the fluency and dark humor of Tom Perrotta's The Wishbones and Joe College, Little Children exposes the adult dramas unfolding amidst the swingsets and slides of an ordinary American playground.

Tom Perrotta's thirty-ish parents of young children are a varied and surprising bunch. There's Todd, the handsome stay-at-home dad dubbed "The Prom King" by the moms of the playground; Sarah, a lapsed feminist with a bisexual past, who seems to have stumbled into a traditional marriage; Richard, Sarah's husband, who has found himself more and more involved with a fantasy life on the internet than with the flesh and blood in his own house; and Mary Ann, who thinks she has it all figured out, down to scheduling a weekly roll in the hay with her husband, every Tuesday at 9pm.

They all raise their kids in the kind of sleepy American suburb where nothing ever seems to happen--at least until one eventful summer, when a convicted child molester moves back to town, and two restless parents begin an affair that goes further than either of them could have imagined.

Perrotta received Golden Globe and Academy Award nominations for best screenplay for the film adaptation of Little Children, which was directed by Todd Field and starred Kate Winslet and Jennifer Connelly.

“Little Children offers a generous serving of laugh-out-loud moments... Perrotta is an astute student of 21st-century suburban life. He skewers--with a light touch--everything from book clubs to personal ads to mothers worried about getting their 4-year-olds into Harvard. At the same time he locates the humanity in even the most repugnant characters. Perrotta knows the white-picket fence dream is just that. Life is disappointing, sure, but a little bit of breezily sardonic humor goes a long way to ease the pain.” —USA Today

“The voice is so key to what's so good about the book...Little Children is certainly Perrotta's most ambitious book...it marks a leap for Perrotta, a suggestion that there may be bigger books inside him. It is also that rarity, a book that understands the mature wisdom of compromise without denying any of the accompanying melancholy.” —Charlie Taylor, salon.com

“Perrotta isn't breaking new ground when he reveals that American suburbs are petri dishes of ennui and alienation. But the he shows admirable zeal in prosecuting the case, and he comes as close as anybody to answering a not unimportant question: If the suburbs are the perfect community, the incarnation in grass and sunlight of American affluence, then how come life there is such hell?” —Time Magazine

“The eponymous children in this satirical novel are actually adults who, chafing at the burdens of parenthood, try to re-create their unencumbered youth...The humor is sometimes cruel, but Perrotta never betrays the complexity of his characters.” —The New Yorker

“Like the author's Election, this book tackles serious topics--like adultery and even pedophilia--with a surprisingly light tone.” —US Weekly Magazine

“Big Important Book of the Month...Perrotta wisely refuses to condescend to the world he satirizes, and his masterful perspective provides the reader with a breezy omniscience over the character's failures in life. The book is disarmingly funny but rueful...the book's screenplay speed makes it infinitely readable. Little Children is a brave novel...engrossing, compassionate.” —Esquire Magazine

“What a wicked joy it is to welcome Little Children, Tom Perrotta's extraordinary novel...a sterling comic contribution...raises the question of how a writer can be so entertainingly vicious and yet so full of fellow feeling. Bracingly tender moments stud Perrotta's satire...at once suspenseful, ruefully funny and ultimately generous...What is Tom Perrotta but an American Chekov whose characters even at their most ridiculous seem blessed and enobled by a luminous human aura?” —Will Blythe, New York Times Book Review

“The cast is so real that book groups will have a blast comparing people they know to the ones in the book. Perrotta is that rare writer equally gifted at drawing people's emotional maps...and creating sidesplitting scenes. Suburban comedies don't come any sharper.” —People Magazine

“Tom Perrotta's Little Children made me laugh so hard I had to put it down...an effervescent new work...a gentle, sparkling satire.” —Entertainment Weekly

“With Little Children Perrotta has moved into the suburbs with a wrecking ball. He has cooked up recipes of depravity that would curl Betty Crocker's hair. If good satire can generate a corrective jolt, this may be a deadly shock.” —Christian Science Monitor

“With this, his fifth book, Tom Perrotta has to be considered one of our true genius satirists. Little Children is a great book. Hilarious (I haven't laughed out loud so much over a book in years) but also deeply compassionate and, at times, terrifying. It's both an indictment of, and an elegy to, that odd sociological construct known as suburban America. I was enthralled by every page, and damn if I didn't find myself wishing I'd written it.” —Dennis Lehane, author of Mystic River