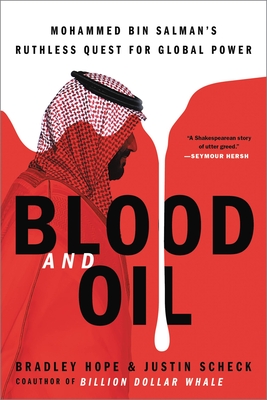 From award-winning Wall Street Journal reporters comes a revelatory look at the inner workings of the world's most powerful royal family, and how the struggle for succession produced Saudi Arabia's charismatic but ruthless Crown Prince Mohammed bin Salman, aka MBS.​

35-year-old Mohammed bin Salman's sudden rise stunned the world. Political and business leaders such as former UK prime minister Tony Blair and WME chairman Ari Emanuel flew out to meet with the crown prince and came away convinced that his desire to reform the kingdom was sincere. He spoke passionately about bringing women into the workforce and toning down Saudi Arabia's restrictive Islamic law. He lifted the ban on women driving and explored investments in Silicon Valley.

But MBS began to betray an erratic interior beneath the polish laid on by scores of consultants and public relations experts like McKinsey & Company. The allegations of his extreme brutality and excess began to slip out, including that he ordered the assassination of journalist Jamal Khashoggi. While stamping out dissent by holding 300 people, including prominent members of the Saudi royal family, in the Ritz-Carlton hotel and elsewhere for months, he continued to exhibit his extreme wealth, including buying a $70 million chateau in Europe and one of the world's most expensive yachts. It seemed that he did not understand nor care about how the outside world would react to his displays of autocratic muscle—what mattered was the flex.

Blood and Oil is a gripping work of investigative journalism about one of the world's most decisive and dangerous new leaders. Hope and Scheck show how MBS' precipitous rise coincided with the fraying of the simple bargain that had been at the head of US-Saudi relations for more than 80 years: oil, for military protection. Caught in his net are well-known US bankers, Hollywood figures, and politicians, all eager to help the charming and crafty crown prince.

The Middle East is already a volatile region. Add to the mix an ambitious prince with extraordinary powers, hunger for lucre, a tight relationship with the White House through President Trump's son in law Jared Kushner, and an apparent willingness to break anything—and anyone—that gets in the way of his vision, and the stakes of his rise are bracing. If his bid fails, Saudi Arabia has the potential to become an unstable failed state and a magnet for Islamic extremists. And if his bid to transform his country succeeds, even in part, it will have reverberations around the world.

Bradley Hope, based in London, is the New York Times bestselling coauthor of Billion Dollar Whale and covers finance and malfeasance for the Wall Street Journal. Before that he spent six years as a Middle East correspondent. Hope is a Pulitzer Prize finalist and Gerald Loeb Award winner.

Justin Scheck, based in New York, has worked at the Wall Street Journal since 2007, covering white collar crime across four continents. He has been writing about Saudi Arabia since 2016. Scheck is a Pulitzer Prize finalist.

"Blood and Oil is the fascinating and highly entertaining tale of Mohammed bin Salman's rise to power. With fly-on-the-wall reporting and palace intrigue worthy of Machiavelli, it will keep you turning the pages at a fast clip until its tragic denouement. And more importantly, it will leave you with a deep and nuanced understanding of the Crown Prince's thinking and its implications for Saudi Arabia and the entire Middle East."
—John Carreyrou, author of Bad Blood

"This is as close to the truth, to the real story of the corruption, vulgarities, horrors, and lies of the Kingdom and its current despot as we are likely to get. It also can be read as a Shakespearean story of utter greed."—Seymour Hersh, author of Chain of Command

"Blood and Oil is the best book I've read about the Middle East. It gets deep into the most opaque place on earth, without a false note anywhere. Not to mention the book is a wonderfully readable page-turner, and indispensable if you want a glimpse of the future of Saudi Arabia and the world."—Robert Baer, author of See No Evil and Sleeping with the Devil

"[Blood and Oil is] lively and well written, and it draws a sharp portrait of the man at its heart....Hope and Scheck have done a great deal of digging and have unearthed some eye-popping tales."—The New York Times Book Review

"Bradley Hope and Justin Scheck chronicle the truly incredible story of MBS's rise in the deep, multidimensional way that only experienced Wall Street Journal reporters can do. The book reads like a novel, but it also plays the critically important role of illuminating a real person who is going to shape our world in ways we would all be better for understanding."—Bethany McLean, author of Saudi America and co-author of The Smartest Guys in the Room

"A crisp page-turner of a book teeming with telling detail...Blood and Oil is particularly good on the link-up between the Saudi sovereign wealth fund and Masayoshi Son of SoftBank....There is plenty more in Hope and Scheck's splendid book."—Financial Times

"An engrossing new book....Bradley Hope and Justin Scheck... deliver a vivid portrait of treachery and power grabs in the Saudi royal court, and attempt to uncover what drives some of the young royal's often reckless decision-making."—NPR.org

"Hope and Scheck confront us with the conundrum of a young man who is doing good by his Kingdom-brilliantly describing how the enigmatic Crown Prince is bringing progress to Arabia as we would see it in the West-while operating with ruthlessness and absolutism that make the stomach curl. Blood and Oil is compelling reading. We are challenged and enthralled on every page."—Robert Lacey, bestselling author of The Crown and Inside the Kingdom

"Blood and Oil is a revelatory book that resonates with a stranger-than-fiction quality as the authors' analysis of the crown prince's brutishness, outlandishness, and reformer's mentality is as riveting as it is profound."—Bryan Burrough, author of Public Enemies and co-author of Barbarians at the Gate

"If you thought you knew Saudi Arabia, such as any outsider could, you didn't -- and for as much as you understood the Kingdom and its politics, you don't.... Blood and Oil is a fantastic narrative read into the sweeping changes that Mohammed bin Salman has taken and is taking in Saudi Arabia. It is exceptionally well written, a compelling read.... Blood and Oil is a great addition to contemporary writing on Saudi Arabia and Mohammed bin Salman."—Joshua C. Huminski, The Diplomatic Courier

"A fascinating look at how MBS came to power, that a lot of people didn't see coming."—Yahoo! Finance

"For once, the publisher's hype is true. Blood and Oil really is a riveting page-turner, a descent into a nest of vipers, a chilling profile of Saudi Crown Prince Mohammed bin Salman."
—The Irish Times

"In Blood and Oil, Bradley Hope and Justin Scheck have gone to painstaking lengths to lift the veil on the character of a young man shaking up the country, and beyond. The result is a gripping page-turner."—Reuters Breakingviews

"A fiery book with never-heard-of revelations about the de facto ruler of Saudi Arabia."
—Albawaba

"A captivating book on the world's financial underbelly."—Corporate Compliance Insights

"Details some jaw-dropping incidents of corruption."—InsideOver

"[A] valuable new account...an important addition to the alarming portrait of the unstable, murderous 35-year-old who rules the oil-producing kingdom."—Mondoweiss

"Blood and Oil is a fascinating glimpse into the politics of oil, and how staggering wealth and unchecked ambition created what most would consider a true monster...Blood and Oil unfolds like a fast-paced suspense thriller with the grandiosity of a Shakespearean play...an excellent read, an important book."—The Premise Pod

"This is brave, rigorous, and commendable work."—MoneyControl

"A masterful biography...This fast-paced, well-researched book is an excellent primer on current U.S.-Saudi relations and Middle Eastern dynamics, and will also draw in those interested in palace intrigue."—Library Journal (starred review)

"Hope and Scheck take a comprehensive and alarming look at Saudi crown prince Mohammed bin Salman....[They] marshal their research into a page-turning narrative that persuasively casts MBS as a grave danger to the region. This detailed exposé rings true."
—Publishers Weekly

“Blood and Oil hits the ground running at a frenetic pace with the 2017 arrests. The action and drama underpinning the desert kingdom and its denizens proves completely engrossing. The authors have done admirable work in their profile of Mohammed Bin Salman and his Machiavellian ways. A gripping biography & geopolitical narrative.”—San Francisco Book Review

“As for Bradley Hope and Justin Scheck, they offer the readers an excellent biography of a world leader who knows how to navigate the treacherous waters of politics at its highest level, guided by an astute sense of history. Honestly, this is one of the best books I have read this year.”—Bookmarc Reviews

“Game of Thrones has nothing on Mohammed bin Salman’s grab for power in Saudi Arabia, the cunning, lies, threats, and murderous ambition with which an also-ran of a prince in his early thirties carved his way to the top of the royal heap documented here in chilling detail.”—Daily Mail

“[Blood and Oil] could not be more timely.”—Middle East Monitor (MEMO)