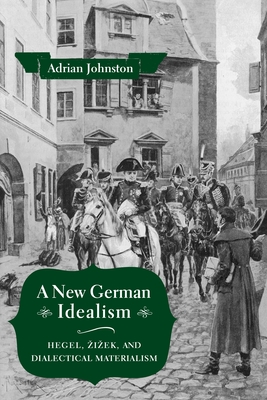 In 2012, philosopher and public intellectual Slavoj Zizek published what arguably is his magnum opus, the one-thousand-page tome Less Than Nothing: Hegel and the Shadow of Dialectical Materialism. A sizable sequel appeared in 2014, Absolute Recoil: Towards a New Foundation of Dialectical Materialism. In these two books, Zizek returns to the German idealist G. W. F. Hegel in order to forge a new materialism for the twenty-first century. Zizek's reinvention of Hegelian dialectics explores perennial and contemporary concerns: humanity's relations with nature, the place of human freedom, the limits of rationality, the roles of spirituality and religion, and the prospects for radical sociopolitical change.

In A New German Idealism, Adrian Johnston offers a first-of-its-kind sustained critical response to Less Than Nothing and Absolute Recoil. Johnston, a leading authority on and interlocutor of Zizek, assesses the recent return to Hegel against the backdrop of Kantian and post-Kantian German idealism. He also presents alternate reconstructions of Hegel's positions that differ in important respects from Zizek's version of dialectical materialism. In particular, Johnston criticizes Zizek's deviations from the secular naturalism and Enlightenment optimism of his chosen sources of inspiration: not only Hegel, but Karl Marx and Sigmund Freud too. In response, Johnston develops what he calls transcendental materialism, an antireductive and leftist materialism capable of preserving and advancing the core legacies of the Hegelian, Marxian, and Freudian traditions central to Zizek.

Adrian Johnston is Distinguished Professor in and Chair of the Department of Philosophy at the University of New Mexico and is a faculty member at the Emory Psychoanalytic Institute in Atlanta. His many books include Zizek's Ontology: A Transcendental Materialist Theory of Subjectivity (2008); Prolegomena to Any Future Materialism, vol. 1 The Outcome of Contemporary French Philosophy (2013); and, with Catherine Malabou, Self and Emotional Life: Philosophy, Psychoanalysis, and Neuroscience (2013, Columbia University Press). With Todd McGowan and Slavoj Zizek, he is a coeditor of the book series Diaeresis at Northwestern University Press.