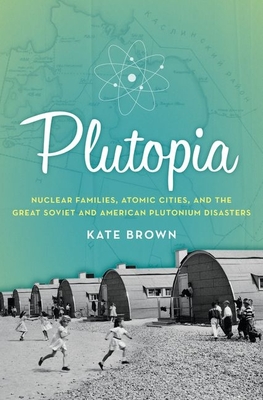 While many transnational histories of the nuclear arms race have been written, Kate Brown provides the first definitive account of the great plutonium disasters of the United States and the Soviet Union. In Plutopia, Brown draws on official records and dozens of interviews to tell the extraordinary stories of Richland, Washington and Ozersk, Russia-the first two cities in the world to produce plutonium. To contain secrets, American and Soviet leaders created plutopias--communities of nuclear families living in highly-subsidized, limited-access atomic cities. Fully employed and medically monitored, the residents of Richland and Ozersk enjoyed all the pleasures of consumer society, while nearby, migrants, prisoners, and soldiers were banned from plutopia--they lived in temporary staging grounds and often performed the most dangerous work at the plant. Brown shows that the plants' segregation of permanent and temporary workers and of nuclear and non-nuclear zones created a bubble of immunity, where dumps and accidents were glossed over and plant managers freely embezzled and polluted. In four decades, the Hanford plant near Richland and the Maiak plant near Ozersk each issued at least 200 million curies of radioactive isotopes into the surrounding environment--equaling four Chernobyls--laying waste to hundreds of square miles and contaminating rivers, fields, forests, and food supplies. Because of the decades of secrecy, downwind and downriver neighbors of the plutonium plants had difficulty proving what they suspected, that the rash of illnesses, cancers, and birth defects in their communities were caused by the plants' radioactive emissions. Plutopia was successful because in its zoned-off isolation it appeared to deliver the promises of the American dream and Soviet communism; in reality, it concealed disasters that remain highly unstable and threatening today. An untold and profoundly important piece of Cold War history, Plutopia invites readers to consider the nuclear footprint left by the arms race and the enormous price of paying for it.

Kate Brown is Associate Professor of History at the University of Maryland, Baltimore County and the author of A Biography of No Place: From Ethnic Borderland to Soviet Heartland, winner of the American Historical Association's George Louis Beer Prize. A 2009 Guggenheim Fellow, her work has alsoappeared in the Times Literary Supplement, American Historical Review, Chronicle of Higher Education, and Harper's Magazine Online.