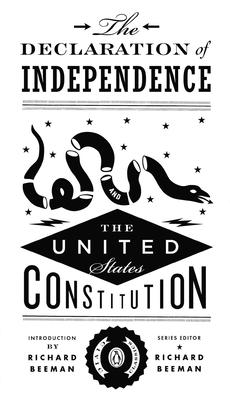 This is book number 1 in the Penguin Civic Classics series.

What is the President, Congress, and the Supreme Court really allowed to do? This unique and handy guide includes the documents that guide our government, annotated with accessible explanations from one of America's most esteemed constitutional scholars.

In one portable volume, with accessible annotations and modernizing commentary throughout, Richard Beeman presents The Declaration of Independence and the United States Constitution. Beeman has created a fascinating apparatus for understanding the most important document in American history—and why it’s as central in the America of today as it was in creation of the country.

Penguin presents a series of six portable, accessible, and—above all—essential reads from American political history, selected by leading scholars. Series editor Richard Beeman, author of The Penguin Guide to the U.S. Constitution, draws together the great texts of American civic life to create a timely and informative mini-library of perennially vital issues. Whether readers are encountering these classic writings for the first time, or brushing up in anticipation of the 50th anniversary of the Civil Rights Act, these slim volumes will serve as a powerful and illuminating resource for scholars, students, and civic-minded citizens.

Richard Beeman, the John Welsh Centennial Professor of History Emeritus at the University of Pennsylvania, has previously served as the Chair of the Department of History, Associate Dean in Penn's School of Arts and Sciences, and Dean of the College of Arts of Sciences. He serves as a trustee of the National Constitution Center and on the center's executive committee. Author of seven previous books, among them The Penguin Guide to the United States Constitution  and Plain Honest Men: The Making of the American Constitution, Professor Beeman has received numerous grants and awards including fellowships from the National Endowment for the Humanities, the Rockefeller Foundation, the Institute for Advanced Study at Princeton, and the Huntington Library. His biography of Patrick Henry was a finalist for the National Book Award.