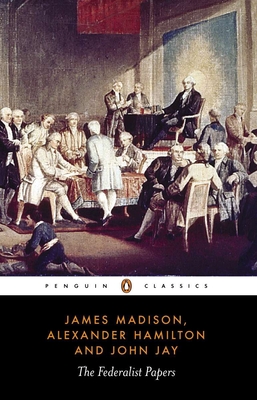 A series of letters by some of America's Founding Fathers, whose defenses of the Constitution are still relevant today

Originally published anonymously, The Federalist Papers first appeared in 1787 as a series of letters to New York newspapers exhorting voters to ratify the proposed Constitution of the United States. Still hotly debated, and open to often controversial interpretations, the arguments first presented here by three of America’s greatest patriots and political theorists were created during a critical moment in our nation’ s history, providing readers with a running ideological commentary on the crucial issues facing democracy. Today The Federalist Papers are as important and vital a rallying cry for freedom as ever.

This edition features the original eighteenth-century text, with James Madison’s fascinating marginal notations, as well as a complete text of the Constitution.

For more than seventy years, Penguin has been the leading publisher of classic literature in the English-speaking world. With more than 1,700 titles, Penguin Classics represents a global bookshelf of the best works throughout history and across genres and disciplines. Readers trust the series to provide authoritative texts enhanced by introductions and notes by distinguished scholars and contemporary authors, as well as up-to-date translations by award-winning translators.

Alexander Hamilton (1757-1804) was born in the West Indies and served during the War of Independence as a captain. His military brilliance was recognized, and he was sent on several important military commissions. He was George Washington’s secretary and aide-de-camp and in 1787 become a Member of the Constitutional Convention. From 1789 to 1795 he was the first Secretary of the Treasury, and in 1801 he held the casting vote against Burr and for Jefferson. He fought a duel with Burr and died the next day.

James Madison (1751-1836) was the fourth President of the United States and become known as the ‘father’ of the Constitution because of his influence in planning it and drawing up the Bill of Rights. He was Secretary of State under Jefferson, and his main achievement in this role was the purchase of Louisiana from the French. He lived in Montpelier, Virginia, for eighty-five years, two of which he spent on the governor’s council. He was elected President in 1809 and again in 1812. During his terms in office he worked to abolish slavery, to disestablish the Church and to seek peace, although under his command the war against Britain resulted in a U.S. triumph.

John Jay (1745-1829) served the new nation in both law and diplomacy and established important judicial precedents as first Chief Justice of the Supreme Court. A New York attorney from 1768, he won a wide reputation with The Address to the People of Great Britain, which stated the claims of the colonists. He did not sign the Declaration of Independence in 1776 but helped to ensure its approval in New York. In 1789 he was appointed the first U.S. Chief Justice and shaped the Supreme Court procedures. The Jay Treaty of 1794 with Great Britain made him unpopular, and his hopes of succeeding Washington as President faded. After a spell as Governor of New York he retired to a farm, where he spent twenty-seven uneventful years.