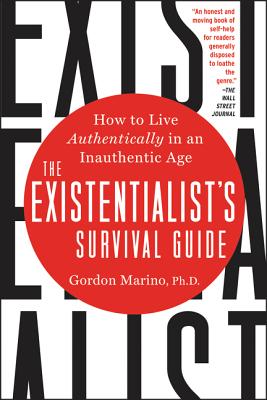 “When it comes to living, there’s no getting out alive. But books can help us survive, so to speak, by passing on what is most important about being human before we perish. In The Existentialist’s Survival Guide, Marino has produced an honest and moving book of self-help for readers generally disposed to loathe the genre.” —The Wall Street Journal

Soren Kierkegaard, Frederick Nietzsche, Jean-Paul Sartre, and other towering figures of existentialism grasped that human beings are, at heart, moody creatures, susceptible to an array of psychological setbacks, crises of faith, flights of fancy, and other emotional ups and downs. Rather than understanding moods—good and bad alike—as afflictions to be treated with pharmaceuticals, this swashbuckling group of thinkers generally known as existentialists believed that such feelings not only offer enduring lessons about living a life of integrity, but also help us discern an inner spark that can inspire spiritual development and personal transformation. To listen to Kierkegaard and company, how we grapple with these feelings shapes who we are, how we act, and, ultimately, the kind of lives we lead.

In The Existentialist's Survival Guide, Gordon Marino, director of the Hong Kierkegaard Library at St. Olaf College and boxing correspondent for The Wall Street Journal, recasts the practical takeaways existentialism offers for the twenty-first century. From negotiating angst, depression, despair, and death to practicing faith, morality, and love, Marino dispenses wisdom on how to face existence head-on while keeping our hearts intact, especially when the universe feels like it’s working against us and nothing seems to matter.

What emerges are life-altering and, in some cases, lifesaving epiphanies—existential prescriptions for living with integrity, courage, and authenticity in an increasingly chaotic, uncertain, and inauthentic age.

Gordon Marino is a professor of philosophy and the director of the Hong Kierkegaard Library at St. Olaf College. He is the author of Kierkegaard in the Present Age, coeditor of The Cambridge Companion to Kierkegaard, and editor of Basic Writings of Existentialism, Ethics: The Essential Writings, and The Quotable Kierkegaard. A veteran boxing trainer, Marino is also an award-winning boxing writer for The Wall Street Journal and other outlets.  His work has appeared in the New York Times, The Atlantic, Newsweek, The Washington Post, Los Angeles Times, and many other domestic and international publications. He lives in Northfield, Minnesota.

“The Existentialist’s Survival Guide is a remarkable book. We can’t think of another writer who so thoroughly understands Kierkegaard and his followers, presents their thought more accessibly than they themselves did, and—crucially— relates them concretely to ​the dark places in ​his own life, and ours.” — Thomas Cathcart and Daniel Klein, authors of Plato and a Platypus Walk Into A Bar, and Heidegger and a Hippo Walk Through Those Pearly Gates

“When it comes to living, there’s no getting out alive. But books can help us survive...by passing on what is most important about being human before we perish. Marino has produced an honest and moving book of self-help for readers generally disposed to loathe the genre.” — The Wall Street Journal

“Marino’s brilliant The Existentialist’s Survival Guide: How to Live Authentically in an Inauthentic Age. . . gives existentialism a 21st-century presence more gripping, nuanced, and convincing than in its initial American portrayal 60 years ago. . . The prose is electric, illustrating the point that existentialism is also literary.” — The Los Angeles Review of Books

“[Marino] brings his life story together with philosophy in this lively account of how existentialism can enhance life and awaken empathy amid the realities of anxiety, death, and depression. . . His disarming honesty and sense of humor make the book easy to read despite its heavy subject matter.” — The Christian Century