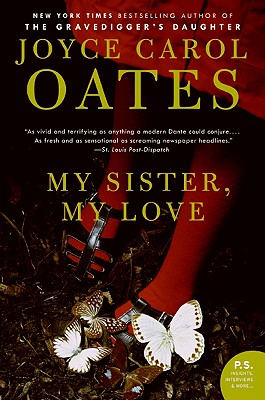 By Joyce Carol Oates
$17.99
Available to Ship From Our Warehouse

“Joyce Carol Oates' latest novel takes our tabloid-obsessed culture and turns it on its head. Skyler Rampike tells the story of the murder of his sister, Bliss, and the media frenzy that followed. His perspective is unique, but the story is universal. Nothing short of spectacular.”
— Katie Glasgow, Mitchell Books, Fort Wayne, IN

Herein is the unexpurgated first-person narrative of nineteen-year-old Skyler Rampike, the only surviving child of an "infamous" American family destroyed a decade ago by the murder of Skyler’s six-year-old ice-skating champion sister, Bliss, and the media scrutiny that followed. Part investigation into the unsolved murder, part elegy for the lost Bliss and for his own lost childhood, Skyler’s narrative is an alternately harrowing and corrosively funny exposé of upper-middle-class American pretensions—and an unexpectedly subtle and sympathetic exploration of those who dwell in "Tabloid Hell."

Joyce Carol Oates is a recipient of the National Medal of Humanities, the National Book Critics Circle Ivan Sandrof Lifetime Achievement Award, the National Book Award, and the PEN/Malamud Award for Excellence in Short Fiction, and has been several times nominated for the Pulitzer Prize. She has written some of the most enduring fiction of our time, including the national bestsellers We Were the Mulvaneys, Blonde, which was nominated for the National Book Award, and the New York Times bestseller The Falls, which won the 2005 Prix Femina. Her most recent novel is A Book of American Martyrs. She is the Roger S. Berlind Distinguished Professor of the Humanities at Princeton University and has been a member of the American Academy of Arts and Letters since 1978.

“Employing her powerful imagination, the gifted Oates gets inside her fictional characters’ tormented souls to solve the case…as a literary exercise, it deserves a rave…she brilliantly depicts status-obsessed parents who alternately push and ignore their deeply unhappy children.”
— USA Today

“Oates is in top form as she creates a narrative voice that is bitter and humorous yet sympathetic, building to a dramatic and satisfying resolution.”
— Library Journal

“Oates is just a fearless writer…[with] her brave heart and her impossibly lush and dead-on imaginative powers.”
— Los Angeles Times

“The Gravedigger’s Daughter is Joyce Carol Oates at her very best: mesmerizing, intense and unique in her vision and power.”
— Scott Turow

“…This book is easy to admire… my reaction was…“Wow: What a writer.””
— Seattle Times

“…there is much to admire in this bittersweet tale of one woman’s triumph of the will...engaging…”
— New York Times

“There is much to admire in this bittersweet tale of one woman’s triumph of will.”
— Seattle Post-Intelligencer

“…there is much to admire in this bittersweet tale of one woman’s triumph of the will...engaging…”
— Contra Costa Times

“Joyce Carol Oates is one of the great writers of our time.”
— John Gardner