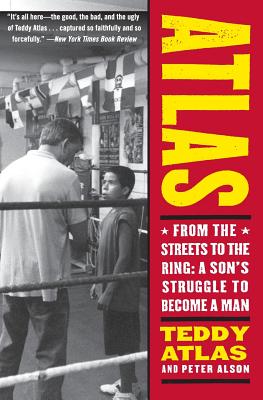 "Of all the people who have affected by my life and influence the choices I've made, none has been more important than my father."

So begins the autobiography of legendary boxing trainer and commentator Teddy Atlas, who grew from the rebellious son of a doctor to a man who embraces, and lives by, his father's values and code.

In this gritty, spellbinding tale, Atlas recounts his fascinating life -- as a juvenile delinquent on the streets of Staten Island; as a boxer and Golden Gloves champion under the tutelage of famed trainer Cus D'Amato; as a companion to the dangerous, unpredictable Sammy "the Bull" Gravano, up until the day Gravano turned rat and brought down crime boss John Gotti; and as a trainer of champions and contenders, among them fourteen-year-old Mike Tyson and heavyweight Michael Moorer, whom he led to the crown with a win over Evander Holyfield.

Equally engrossing are Teddy Atlas's accounts of training dancer and choreographer Twyla Tharp for her successful comeback at age forty-two; his work with actor Willem Dafoe, preparing him for his role as a concentration camp boxer in the film Triumph of the Spirit; his journey to Poland to choreograph the film's boxing scenes; and his own performance in movies such as Play It to the Bone. In sharing his stories, Atlas reveals the philosophy by which he lives.

Like Teddy Atlas -- inimitable, tough, honest, and wise -- this book inspires. It is about so much more than boxing. It is a story of overcoming hardships, of compassion for those in need, of tremendous personal integrity, and of personal and professional triumph.

Teddy Atlas works as a color analyst on ESPN's Friday Night Fights and was boxing commentator for NBC's coverage of the Olympic games in Sydney (2000) and Athens (2004). He is also founder and chairman of the Dr. Theodore A. Atlas Foundation, named for his father, which has raised and donated more than one million dollars to individuals and organizations in need.

“The book is a winner, on all cards, from the first to the final bell.” — Boston Globe