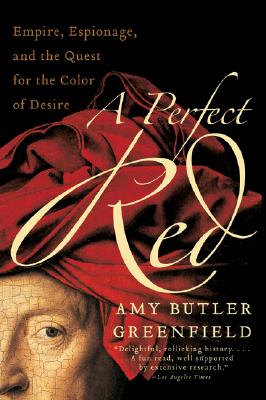 “You’ll finish [Greenfield’s] book with new respect for color, especially for red. With A Perfect Red, she does for it what Mark Kurlansky in Salt did for that common commodity.”—Houston Chronicle

Interweaving mystery, empire, and adventure, Amy Butler Greenfield’s masterful popular history offers a window onto a world far different from our own: a world in which the color red was rare and precious—a source of wealth and power for those who could unlock its secrets. And in this world nothing was more prized than cochineal, a red dye that produced the brightest, strongest red the Old World had ever seen.

A Perfect Red recounts the story of this legendary red dye, from its cultivation by the ancient Mexicans and discovery by 16th-century Spanish conquistadors to the European pirates, explorers, alchemists, scientists, and spies who joined in the chase to unlock its secrets, a chase that lasted more than three centuries. It evokes with style and verve this history of a grand obsession, of intrigue, empire, and adventure in pursuit of the most desirable color on earth.

Amy Butler Greenfield's grandfather and great-grandfather were dyers, and she has long been fascinated by the history of color. Born in Philadelphia, she grew up in the Adirondacks and graduated from Williams College. As a Marshall Scholar at Oxford, she studied imperial Spain and Renaissance Europe. She now lives with her husband near Boston.

“Fascinating...Greenfield has given us a superbly researched history of cochineal red, full of angles and tangents, curiosities and arcana.” — Diane Ackerman, Washington Post Book World

“With A PERFECT RED, she does for [red] what Mark Kurlansky in SALT did for that common commodity.” — Houston Chronicle

“A fascinating story of greed and subterfuge, mixing fashion, folly and ingenuity in equal measure... Written with style and verve.” — J. H. Elliott, University of Oxford

“Greenfield does what the best historical authors do--follows the thread of a story through history without missing a stitch.” — Cleveland Plain Dealer